Pamoja is an HIV prevention and support programme for Africans, by Africans, living in Aotearoa New Zealand. The programme aims to encourage safer sex, regular testing for HIV and provide support for people who are living with HIV. It does this by empowering the community in a culturally appropriate way through events, workshops and community ambassadors.

Pamoja carries on the work of Love Cover Protect – a programme set up in 2011 to support the African community in New Zealand around HIV and AIDS. It forms an important part of the Burnett Foundation Aotearoa strategy to end new transmissions of HIV by 2025. 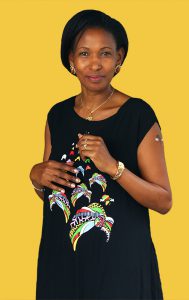 It’s an honour for me to work on the Pamoja team alongside others who are as passionate and committed as I am to a community based approach to HIV prevention. By talking to people about HIV, I hope I can change the way they think about it and reduce stigma. Conversations and relationships are so important. Like they say – hearts change minds.

I have been living with HIV most of my adult life, so understand what it is like to deal with the challenges of HIV. As an educator, stigma is one of the greatest barriers I face, as many people do not want to even talk about HIV. Or, they have so much fear of being diagnosed positive, that they avoid getting tested for HIV. A big part of my role is providing people with information about HIV so they can make informed choices about their health.

Pages in this section